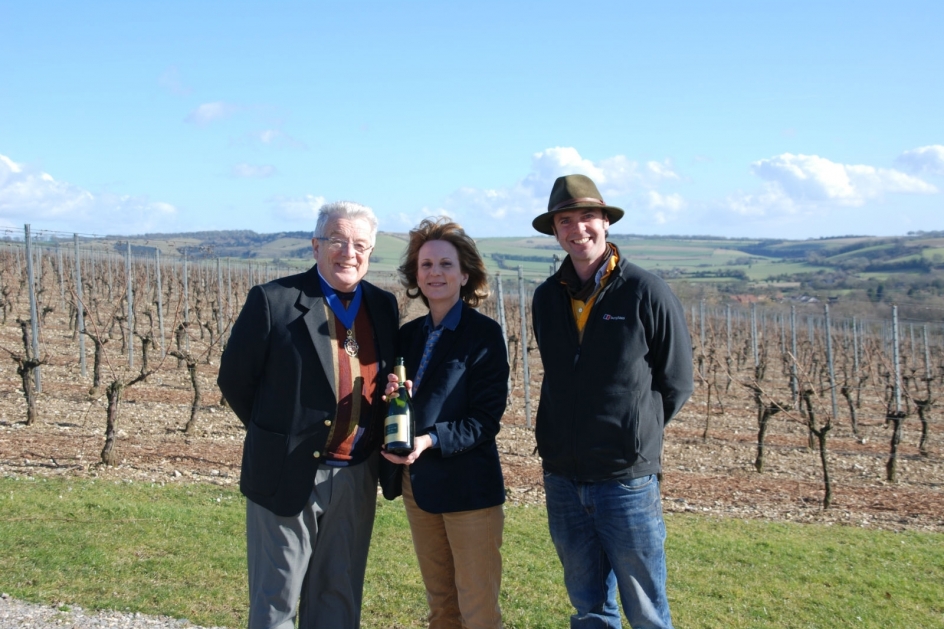 Exton Park Vineyard, an English Sparkling Wine producer based in the Meon Valley, welcomed the Mayor of Winchester, Cllr David McLean, to the estate this week to celebrate the launch of their new magnums, and to hear about their exciting future plans.

Exton Park is a 55 acre single-estate producer with a stunning vineyard; planted on the pure chalk slopes of the Meon Valley, with views across to Old Winchester Hill. They grow all of their own grapes, and make their delicious sparkling wines onsite, in their state-of-the-art winery. Exton Park kicked off 2018 with the launch of their very first Magnums – the Brut Reserve NV, with each bottle presented in a gift box. Since launching their wines in May 2015, the producer has won a total of four Gold Medals, one Trophy, and 24 Silver Medals in international wine competitions.

Mayor McLean enjoyed a tour of the estate on Thursday 15th February and was shown around the well-established vineyard and modern winery by Fred Langdale and Corinne Seely – the Vineyard Manager and Head Winemaker respectively. The team explained how the specific microclimate in the Meon Valley, combined with the pure chalk soils that the vines are planted on, helps to develop the distinctive and attractive flavours for which their wines are rapidly becoming recognised.

The team shared news that many of their Hampshire-produced wines can now be found in top restaurants and wine merchants across the UK and abroad. Additionally, Mayor McLean was shown exciting designs for future development at the vineyard aimed to support the growing business:
“Informative visit today to Exton Park Vineyard, English Sparkling Wines to rival the rest of the world’s Sparkling. The new Cellars will give Exton Park the opportunity to invite buyers and customers to sample wines in the finest of environments, looking out over the vines, and near to the winery for buyers. The future plans allow for Exton Park to supply English Sparkling Wines to compete with the best of Champagne.” – Cllr. David McLean, Mayor of Winchester.

Of the Mayor’s visit, Kit Ellen, Sales and Marketing Manager at Exton Park, said: “It was a pleasure to welcome the Mayor of Winchester to Exton Park Vineyard this week. He brought the sunshine with him, as we took him for a walk around our beautiful vineyard and winery. It meant a lot to the team to see this level of support for the growing Hampshire wine industry, much of which is based around Winchester. Our aim at Exton Park is to produce the finest English Sparkling Wines available – wines which are clearly English in style, and which capture the distinctive terroir that we have identified in Hampshire’s Meon Valley.”