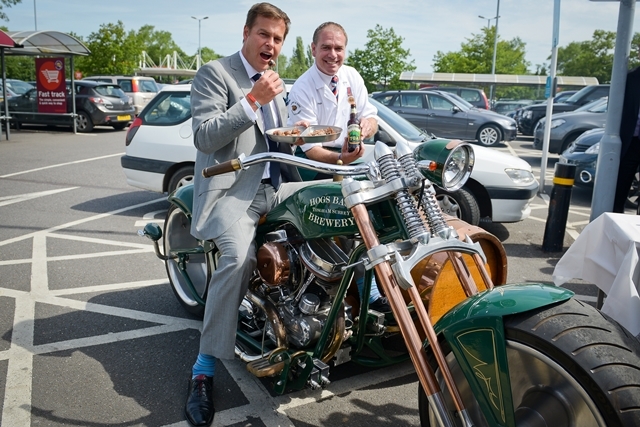 Dragons’ Den star and business entrepreneur Peter Jones lent a hand to business partner and award-winning butcher Paul Turner at an event to celebrate the launch of the Alf Turner ‘Best of British’ and ‘Hair of the Hog’ sausages.

The event at Sainsbury’s Farnham store gave busy shoppers an opportunity to taste first-hand the treats that were freshly prepared by Paul and his team, with a little help from Peter.

Paul, whose family have been making sausages at its Alf Turner butcher’s shop in Aldershot for three generations, first came to Peter’s attention when he appeared on the popular television show Dragons’ Den seeking investment in his traditional British sausages.

Peter, impressed by the quality and flavour of the sausages combined with Paul’s pride and passion for his products, was quick to spot an opportunity, investing in the business to help bring its tasty treats to a much wider audience.

Commenting at the launch, Peter Jones said: “This is an amazing British product and I am delighted for Paul and his team at Alf Turner. One of the best family butchers in the country now has products on supermarket shelves so Britain can really taste what Best of British is like for themselves.”

Since working with Peter, the Alf Turner brand has grown steadily. Last year saw the launch of the UK’s first premium-branded Scotch egg – the Dragon’s Egg - manufactured on behalf of Alf Turner by Tulip Ltd, which was also chosen to make the two new premium fresh sausages. The two new sausages are made with a delicate blend of seasoning and herbs, plus a touch of T.E.A ale from the local Hogs Back Brewery added to the ‘Hair of the Hog’ variety. The sausages are available at selected stores and a donation from every pack sold goes to Help for Heroes, Alf Turner’s chosen charity.
Peter added: “This is going to be a very successful product, with the added bonus that it will also mean more money going to help support our armed forces personnel through Help for Heroes.”