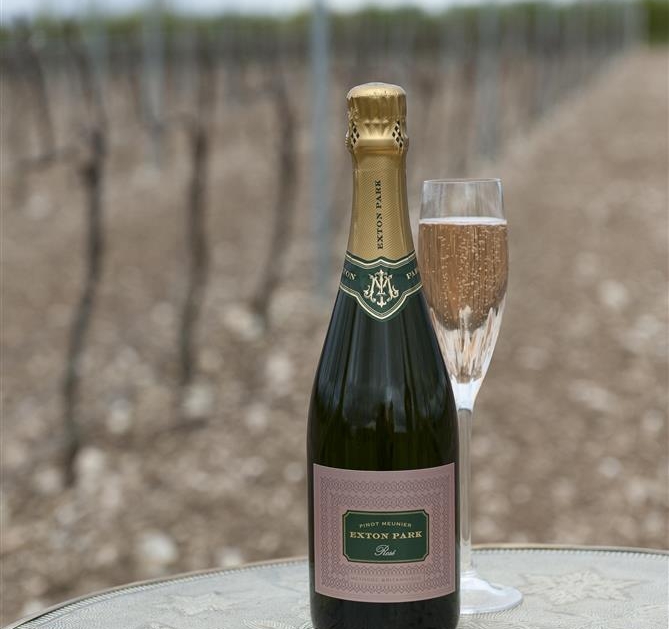 In the last week, it has been announced that not only has the Exton Park Pinot Meunier Rose - seen for the first time at the recent London Wine Fair - been awarded a Gold Medal in the International Wine Challenge, but also Exton Park’s first ‘declared’ vintage, Blanc de Blancs 2011, has won Gold in the Decanter World Wine Awards.

Quite an achievement for this Hampshire property in its first year......and a recognition of the dedicated and collaborative work in the vineyard and the winery. Both seeking to obtain the very best results from the individual vines, and the myriad of terroirs available on site.

‘It is a dream come true’ commented winemaker Corinne Seely, on hearing the news of the prestigious awards. ‘Who would have thought, a year ago, that we would be receiving such accolades.

‘The Vineyard Manager, Fred Langdale, and I always knew we had something very special here at Exton Park. So we have worked together closely to develop its potential - from individual canopy management, to different  methods of crop control for each site.  Every plot has something different to offer’.

‘In the winery, we have two Bücher presses so that the red grapes can be pressed extremely slowly under nitrogen for maximum fruit and freshness – while the other can handle the white grapes immediately after picking.  We also have many small vats, so that we can vinify plot by plot - and then keep those wines in reserve, to add to my maturing ‘library’ for blending.’

With such a wealth of wines at her fingertips, Seely has been able to innovate and develop her own philosophy for English sparkling wines.  ‘As a winemaker, I appreciate the importance of terroir, and as a French winemaker I find English terroir fascinating to express. ‘she explains.

The introduction last week of England’s first 100% Pinot Meunier sparkling Rose is a case in point. ‘Fred and I have always believed that Pinot Meunier has the ability to take on the very English character of the Exton Park soils. In 2014, the oldest Pinot Meunier plot planted in 2003, produced the perfect wines to prove this.’ After 12 months on the lees, the wine – redolent of an English summer garden and a true expression of its English heritage - was disgorged ready for its debut this May.  Picking up a Gold Medal en route....

Also on the successful Gold Medal trail was the citrus yet toasty Blanc de Blancs 2011, justifying Seely’s decision to release an English vintage only in an exceptional year. 2011 was just that. A surprisingly sunny autumn, with warm drying winds, produced the ideal conditions for the early ripening & picking of the Chardonnay grapes, particularly from the pure chalk terroir on the top of the property – the oldest plot in the vineyard. Thus Seely had the most remarkable fruit for that first foray into the brand-new winery.

‘This has been such an exciting year for us all’ she concludes. ‘and the faith that  our owner Malcolm Isaac, continues to have in the team, gives us the confidence to constantly innovate yet remain true to the beating heart of our exceptional Exton Park vineyard.’