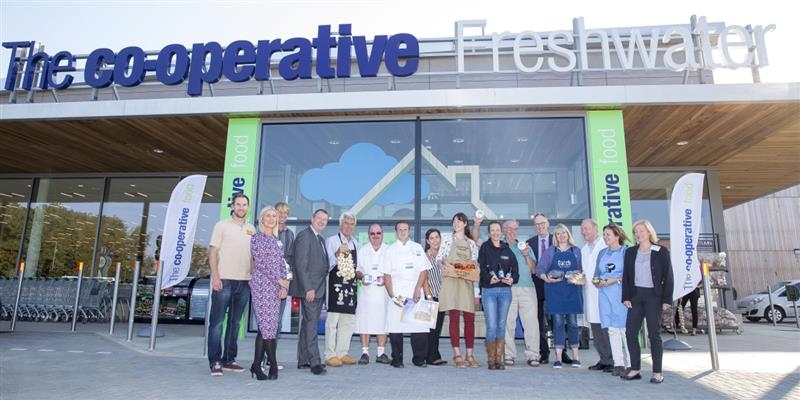 Commitment to supporting the Isle of Wight's community and economy is the driving force behind The Southern Co-operative’s new food store which has opened in Freshwater on the Isle of Wight (Thursday 10 September).

The new store is The Southern Co-operative’s flagship store for its Local Flavours range, stocking food and drink from over 35 Isle of Wight growers and producers. Kate Hibbert, The Southern Co-operative’s Local Sourcing Manager, explained: “The Isle of Wight is renowned for its quality and diversity of local produce and is where our popular Local Flavours range originated nine years ago; this range has now extended to Hampshire, Sussex and across southern England as demand has increased, promoting local distinctiveness and offering valuable support to local food producers and suppliers.”

The store opening has created an additional 30 jobs for local people, in addition to the team who have moved from The Southern Co-operative’s smaller store in Freshwater, which has now closed. As a co-operative, the store has a purpose beyond profit, as General Manager Tony McGuinness, explained: “It’s really important to all of us here that the store is at the hub of the local community and with our new store opening, we want to continue the strong relationship that we have with our customers and local organisations.”

This has included donations over the past five years, totalling over £100,000 community support funding to local groups including FYTbus community bus service, Freshwater Memorial Hall, Isle of Wight Foodbank, West Wight Sports Centre and All Saints CE Primary School. A dedicated Isle of Wight Food Bank donation point will be located within the new store. As well as a dedicated bus stop outside the store for the community FYTbus, customers can use a free customer taxi phone located in the community hub, where local news and activities, together with information for members of The Southern Co-operative will also be available. A defibrillator has been fitted on the store’s exterior wall for emergency medical use by the community. General Post Office services – bill payments, sending letters and parcels -  are available seven days a week during store opening hours (7am-10pm Monday to Saturday, 10am-4pm Sunday), in addition to a larger main Post Office area within the new store open Monday- Saturday from 9am-5.30pm.

Consideration for the local environment has also been a priority. All store waste will be backhauled on delivery vehicles to be sent for recycling, anaerobic digestion or to an energy-from-waste facility. The car park surface is permeable to absorb rainfall and minimise puddles, and landscaping is designed to attract wildlife and enhance their habitat through planting and the inclusion of bat boxes and nesting sparrow terraces. Inside, water efficient measures such as low flow WCs, taps and showers will offer up to 40% water saving, low energy LED lighting and occupancy sensors will minimise lighting use and the building management system makes for more efficient refrigeration, heating and lighting, reducing energy consumption. All electricity used by the store comes from renewable sources through a green energy contract and customers with electric vehicles can recharge these as well as take advantage of dedicated parking spaces.

This is the latest opening for the independent regional retailer which, including 10 community food stores on the Isle of Wight, has nearly 200 stores across southern England and its roots in Hampshire. More information is at thesouthernco-operative.co.uk/food/freshwater-opening