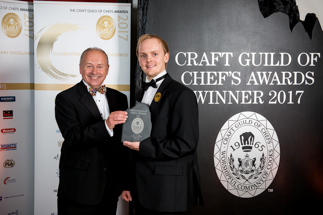 Gordon Stott, landlord and head chef at The Sun Inn pub, near Basingstoke, Hampshire, has received two of the UK hospitality industry’s highest accolades winning Pub Chef of the Year at the Craft Guild of Chefs Awards on June 1st, and an Acorn Award on May 22nd.

Both award schemes seek to highlight and celebrate the achievements of the brightest stars in the industry. The Acorn Awards honour those aged 30 and under from a wide variety of sectors and departments, from general managers to finance directors, marketing, front of house and chefs, with each winner nominated by their peers for their outstanding ability in their field.

The Craft Guild of Chefs Awards, also known as the ‘chefs' Oscars’, recognises top culinary talent from across the country. This is the third time 26-year-old Gordon has made it to the final in the Pub Chef of the Year category.

The latest wins follow an impressive 12 months for Gordon and the team at the multi award-winning Sun Inn. In 2016, the pub received its first 2 AA Rosettes and the highly coveted Michelin Bib Gourmand. The Sun Inn was also named National Gastro Pub of the Year at the Food Awards England 2016.

Gordon comments: “When I took over as head chef and landlord aged 20, I had a long list of things I wanted to achieve and being recognised nationally by my peers was one of them. I’ve dedicated the last six years to making The Sun Inn a success and when the fruits of your labour are finally rewarded, there’s just nothing better. I hope other young people entering the industry will see me as an example of what you can achieve with hard work and passion.”