Chewton Glen named as the number one hotel in the UK 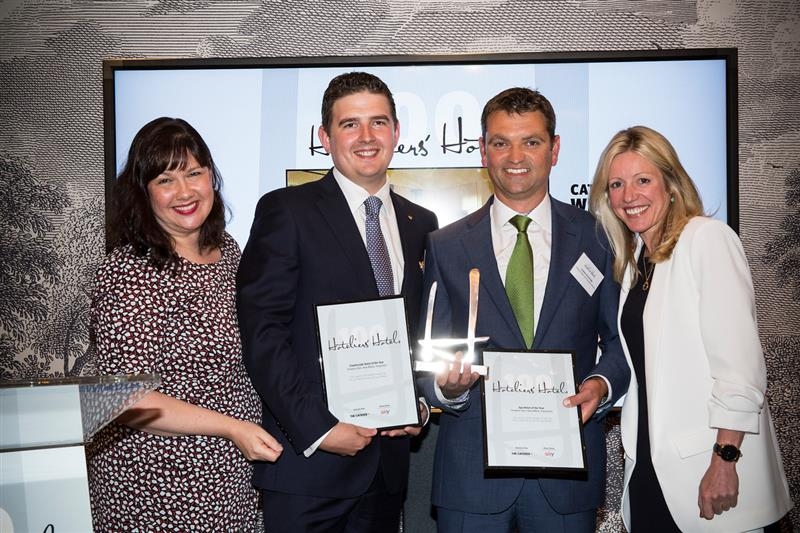 At the first ever ‘Hoteliers’ Hotels Top 100’ awards, held at London’s Ham Yard Hotel on the 13th July 2016, Hampshire Fare member Chewton Glen won not only the number one place in the top 100 listing, but also the accolades of ‘Countryside Hotel of the Year’ and the ‘Spa Hotel of the Year’, a fabulous hat-trick for Chewton Glen.

Attending the glittering reception last week, where the full list was unveiled, Andrew Stembridge, Managing Director of Chewton Glen and Cliveden House said: “I am truly humbled that so many of the good and the great of the hospitality industry chose to vote for Chewton Glen as their favourite hotel, especially knowing how many amazing properties there are to choose from, it is particularly special to myself and the whole team at Chewton Glen that we received this accolade in 2016, as we celebrate our  50th Anniversary at a luxury country house hotel.

Founded in 1966 by its former owner, Martin Skan, the hotel has never been content to stand still, a point not lost on the judges who highlighted recent improvements including the addition of the luxury ‘Treehouse Suites at Chewton Glen’ and the opening later this year of ‘The Kitchen’, a new purpose-built cookery school and informal tasting floor restaurant which will be overseen by chef and TV presenter James Martin.

The inaugural ‘Hoteliers’ Hotels Top 100’ list, unveiled by The Caterer and Sky were compiled by the UK’s leading hoteliers and verified by some of the nation’s pre-eminent hotel experts, including hotel journalist Fiona Duncan, Giovanna Grossi and fellow AA hotel inspectors, and senior editors at The Caterer.  Contributors to the list included past Hoteliers of the Year, and Catey and Hotel Catey winners, as well as members of leading organisations such as Pride of Britain Hotels, Relais & Chateaux and the Master Innholders, and included respected operators such as Robin Hutson, chairman and chief executive of Lime Wood Group and Home Grown Hotels; Thomas Kochs, managing director of the Cafe Royal, and Philip Newman-Hall, the former managing director of Le Manoir aux Quat’Saisons. Hoteliers were not permitted to vote for their own hotel or hotels within their group or collection.

Amanda Afiya, Editor of The Caterer, said: “Hoteliers know their industry, its pitfalls and opportunities best, so who better to ask when compiling a list of the top hotels in the UK? We’re lucky to have so many wonderful hotels across UK and excited to be launching this list. There are, of course, many ways of ranking and evaluating hotels, but there’s nothing quite as special as peer-group recognition.”

Bronwyn de Cholewa, Director for Hotels at Sky described Hoteliers' Hotels as: “A prestigious list of the UK’s best and finest hotels. These awards recognise the exceptional level of detail that goes in to ensure every guest has a perfect stay, and so we are delighted to award Chewton Glen the top spot - along with awards for spa hotel of the year and countryside hotel of the year. From wood-burning stoves to hot tubs on the private deck, and of course Sky boxes in every room, Chewton Glen are exemplars in anticipating their guests’ every need”.

In conclusion Andrew Stembridge said: “I am delighted that Chewton Glen’s sister property, Cliveden House in Berkshire, has also been included in the top 10, this is a tremendous achievement for this iconic heritage property which has undergone a major  restoration since its acquisition and was voted AA Hotel of the Year in 2015.”