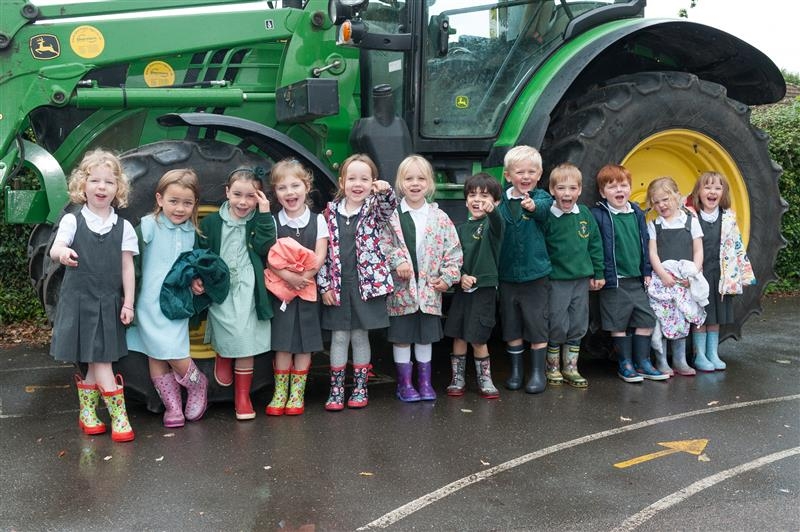 Children of all ages took part in a day of activities put together by Hampshire Fare focusing on the fantastic array of local food and drink grown, reared and made in the county.

Year R pupils got to grips with their local vegetables in a veg head making activity before taking to the outdoors to hunt down some cardboard cut outs of a Hampshire hog.

Year 3 pupils had their eyes opened to the world of growing rapeseed and making oil with Cold Pressed Oil and then moved onto bees and honey with BeeGood.

Parsonage Farm led Year 4 pupils on a pig’s anatomy lesson before offering tastings of their award-winning charcuterie. The pupils then got creative with recycled materials as they worked together to build a scarecrow for the Winchester Cathedral Harvest Weekend.

Year 5 pupils visited nearby Mill Farm for an organic farm trail walk around the farm. The pupils also used the farm’s organic meat to make burgers.
Local vineyard Jenkyn Place welcomed Year 6 pupils for a tour of the vines. In the afternoon Lyburn Cheese came to talk to the year group about dairy farming and cheese-making.

"The children were very excited about this fantastic day of learning put together by Hampshire Fare to showcase some amazing local farmers and producers.” commented Head teacher Mrs Katy Pinchess. “This area was mainly agricultural just two generations ago but now so many of our families work in London and there is the danger that our pupils do not see the links between what is grown and reared and what they eat and buy. At Bentley we are passionate about giving children hands on experiences to making learning both fun and informative. This day filled with visitors and hands on experiences reflects that. A huge thank you to all our visitors and hosts for showcasing the very best of Hampshire for our pupils. What a fantastic experience and I suspect that they are inspiring the next generation to follow in their footsteps"

The school came together for a traditional British school lunch of shepherd’s pie and apple and blackberry crumble using fruit picked from the school grounds. Pupils were also encouraged to bring in puddings made at home on the British Food Fortnight theme of ‘rediscovered long forgotten traditional recipes that were once unique to particular areas of Britain’. The puddings were judged in the ‘Great Bentley Bake Off’ with first prize going to Lola Pinchess in the infants for her apple dapple cake and Olivia Stanley in juniors for her apple and blackberry upside down pudding.

Harry, age 7, is a pupil at the school and commented on the day: “It's tricky to choose a favourite thing because it was all really good. I liked the oil man and the bee man and I loved tasting the honey."

Tracy Nash, Commercial Manager of Hampshire Fare said: “Hampshire Fare is thrilled that today’s event was such a success. We are also delighted that the school we worked with last year on a similar event has been able to repeat the day this year. We plan to continue this positive work and collaborate with another school for British Food Fortnight 2017 so that we can continue to inspire the next generation with local food and farming.”