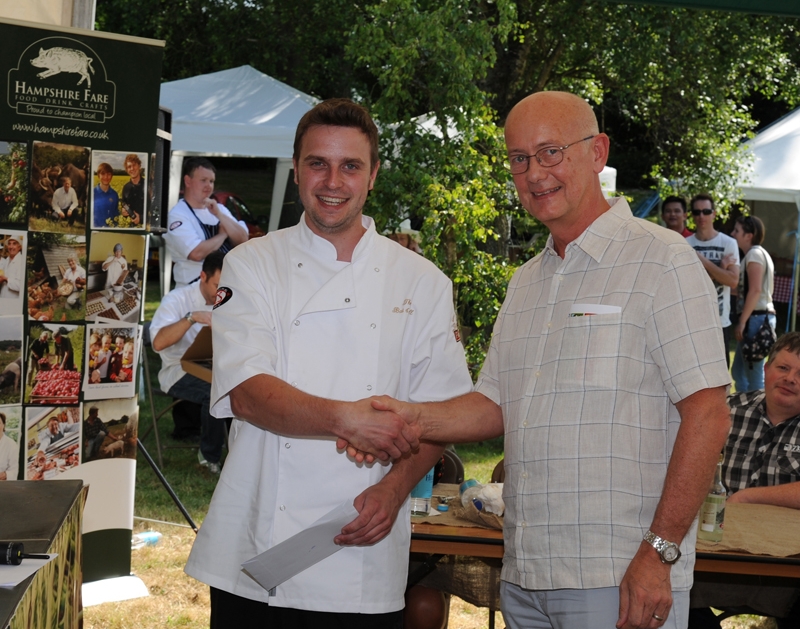 Staff at the Bat & Ball in Clanfield are celebrating their recent triumph in the Fuller's Hampshire Dish of the Year 2013 competition.

Run in conjunction with the Hampshire Food Festival, the competition sees chefs from Fuller's pubs go head to head to find the county's top dish made from locally-sourced ingredients.

The final of the competition was held at the 'Taste of Hampshire' event at Sparsholt College on Saturday 13 July. The six finalists created their dishes at the demonstration kitchen in front of an audience and a panel of judges; Kate Hibbert from The Southern Co-operative, Billy Owton from Owtons Butchers and Colin Simpson from Fuller's.

Each entrant had to create a dish in just 30 minutes which featured Hampshire pork or beef or a sustainable fish. The winning dish came from Simon Bone, head chef at the Bat & Ball in Clanfield. He impressed with his pan fried turbot fillet, new potato, broad bean and garden pea fricassee and watercress salad with a rapeseed oil dressing.

The Bat & Ball prides itself on its delicious local game dishes, seasonal pub favourites and fish specials. Simon was promoted to the position of head chef just six months ago and it is the first time he has entered a cook-off competition. He was delighted to be crowned champion:

'It feels really good to have won. It positive for the pub too as my winning dish is just like the food we serve every day at the Bat & Ball. We believe in using local ingredients as it supports our community and it also means we can trace our products. It was a nerve-racking experience being up on stage and cooking in front of all those people but I'm really pleased I did it!'

The judges chose the dish cooked by Scott Meaden of the Old House at Home in Havant for second place. The chef from the Pilgrim Inn in Marchwood, Alicia Storey came third.

Stephen Sweeting, Executive Chef at Fuller, Smith and Turner commented on the results:

'This year's competition was of a very high standard and extremely challenging for all the chefs. The event is now in its sixth year and continues to go from strength to strength. Fuller's has a great supplier base enabling us to source the best Hampshire produce for our pubs.'

Fuller's is a corporate partner of Hampshire Fare.