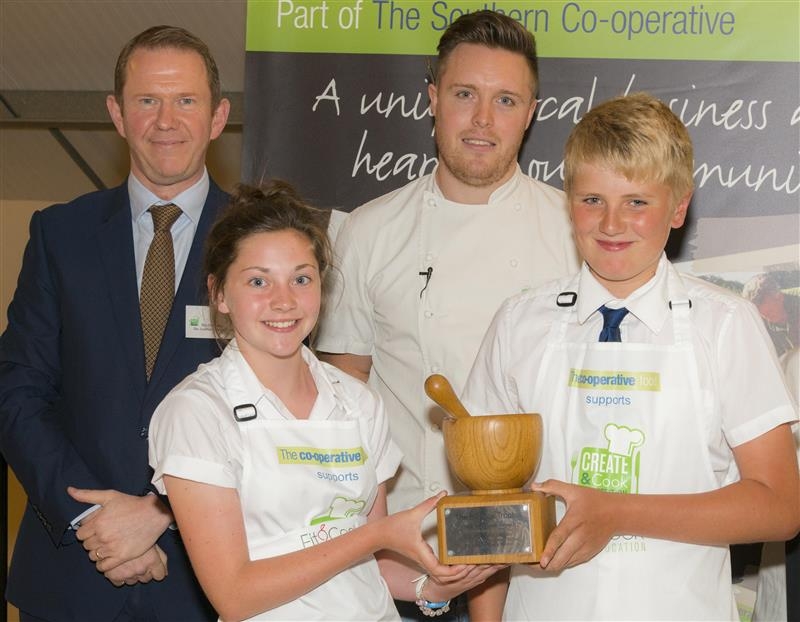 Two 14 year old cooks from the Isle of Wight have been crowned Create and Cook Competition champions by BBC2’s Masterchef: The Professionals champion, Chef Steven Edwards, winning praise for their impressive use of Island produce as well as £1000 for their school’s food technology department.

Joe Lancaster and Alice Hyde, both 14 and pupils at Sandown Bay Academy, fought off stiff competition from three other team finalists from Hampshire (Robert May’s School in Odiham and Applemore Technology College near

Southampton) and West Sussex (The Academy Selsey) at the cookery competition’s final (26 June). The Create and Cook Competition, which is run by fit2cook food education and sponsored by The Southern Co-operative, aims to celebrate local food and nurture the talent and skills of young cooks aged 12-14 years. All four contestant pairs were challenged to design a two course menu full of local flavours and cook this in front of the judging panel at the competition final held at Newlyns Cookery School in Hampshire.

Joe and Alice’s menu played on the theme of Beatrix Potter’s Peter Rabbit.

Joe, who aspires to run a farm with an onsite restaurant, cooked Mr McGregor’s Pie, using wild rabbit that he’d jointed and prepared himself.

“This competition has become so hard to judge as the quality of entries is so high. All the contestants did such a good job and we could see that everyone really wanted to win, I could have been watching professional chefs in the kitchen, not young teenagers. Joe and Alice worked so well together as a team, everything they did took the judges on a journey from field to plate.” The competition was also judged by Chief Operating Officer for Food Retail at The Southern Co-operative, Phil Ponsonby, who oversees the retailer’s Local Flavours range, sourcing over 1500 product lines from producers, farmers and suppliers across the south of England. Phil said; “The finalists’ skills were phenomenal, especially as they were cooking under such time pressure. Joe and Alice had put considerable time and effort into researching ingredients from the Isle of Wight, which really impressed us. It was a very original menu and the judges were unanimous that they deserved to win.” Isle of Wight producer Nuala Grandcourt of Wild Island Dressings, Executive Chef Andy MacKenzie from Exclusive’s Chefs’

Academy in Hampshire and Chef Hannah Westcott from Newlyns Cookery School also made up the judging panel. Nuala enthused; “I’m very proud that the Isle of Wight did so well!”

Joe and Alice were speechless when announced as winners. “I am lost for words, it’s just amazing to win, such a thrill!” said Joe. Alice added: “We really didn’t expect to win; there were so many amazing dishes. Winning has made all the hard work worth it! It’s really encouraged us to carry on cooking and we’d definitely tell others to do everything they can to enter next year.” As well as £1000 for their school’s food technology department, Joe and Alice were awarded the Create and Cook competition trophy and a trophy each featuring their own recipe, professionally styled.

The partnership between The Southern Co-operative and fit2cook food education, which has led to the success of the Create and Cook Competition, was recently highly commended by Business in the Community (BITC) at its Responsible Business Awards. It recognised the competition’s goal to build strong local food communities by linking schools with top local chefs, food producers and retailers and its work to educate the next generation of cooks about food provenance, sustainability, food miles and the importance of buying local food.

The Create and Cook Competition was also supported on the Isle of Wight by Wightlink ferries and The Cookery School at the Isle of Wight College and in Hampshire by The Pig Hotel, New Forest Marque, Hampshire Fare, Hampshire Farmers Markets, Lainston House Hotel, Highbury College and Newlyns Cookery School. . To find out more and try the winning recipes, visit www.fit2cook.co.uk/createandcook.