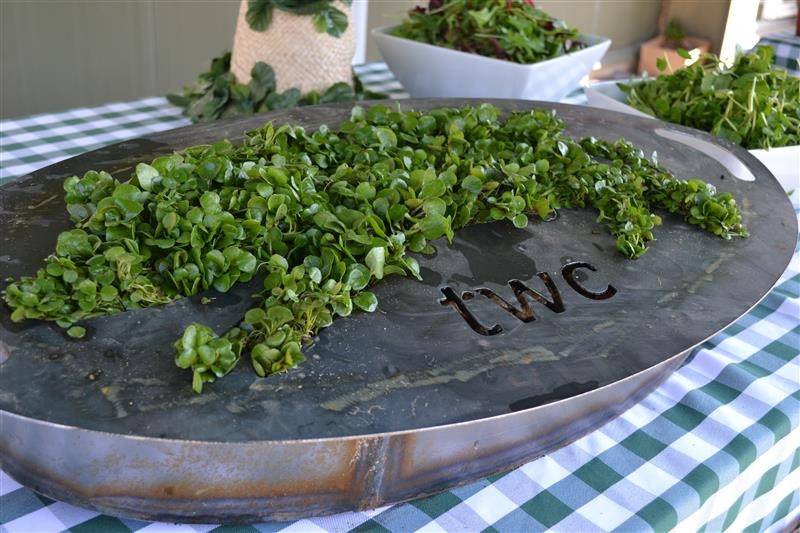 This Sunday thousands will gather in Alresford to celebrate all things watercress. Hampshire has been growing watercress since the mid 19th century with train loads taken up to London on what became known as The Watercress Line.

To celebrate Hampshire Fare's 25th anniversary The Watercress Company has put together 25 facts about watercress.

1. The secret to a great watercress soup is to only add the watercress during the last minute of cooking to retain the wonderful green colour and maximum health benefits. Raymond Blanc chills with ice and serves his cold. Hot or cold, a swirl of crème fraîche is fantastic.

2. Watercress can be grown from seed or cut and come again based on time of year

3. Watercress flowers are pretty and perfectly edible. Unlike other salads it’s not a sign the crop is past its best but an attractive bonus!

5. You can drink the water we grow in at source, its mineral-rich spring water from natural confined aquifers underground. Rainwater percolates through the Hampshire chalk and is naturally rich in calcium.

6. At TWC we grow over 2.5 million kg of watercress a year

7. Watercress  has been grown commercially in Hampshire & Dorset since 1860

8. We also grow wonderful red watercress a natural hybrid of green. Similar peppery taste but with a striking red leaf.

9. In our taste test we found frozen watercress soup tastes even better than fresh, freezing breakdown the cell walls

10. We make watercress powder from freeze-dried fresh organic watercress. Used as a health supplement chefs are also discovering its flavour and colourant properties

11. Watercress is thought to be the only commercial crop the Romans would recognise

12. The world’s first sandwich invented and eaten by the Earl of Sandwich contained cold roast beef and watercress!

13. Phenyl ethyl Isothiocyanates (PEITC’s) found naturally in watercress have been proven to repair DNA damage from strenuous exercise so get on your bike!

14. We grow watercress year-round and harvest every day of the year on our overseas farms

15. Our Dorset and Hampshire springs run all year at 10°C; cooling in the summer and protecting Autumn and Spring crops

16. Watercress flowers are small, white and cross-shaped hence belonging to the family Cruciferae

19. Flan or quiche however you say it, get some watercress in there it will taste delicious!

22. No one eats more watercress than the British, and a bag is sold every second!

23. Watercress has 2 types of roots, anchoring and feeding. When a spring is cut the feeding roots can become an anchoring root and a new plant can grow

24. Up to 10 million litres per hectare of spring water flows through our farms every day!

25. The Latin name of watercress is Nasturtium officinale meaning twisted nose, due to its peppery taste. The is now a Hampshire watercress gin called “Twisted Nose” which uses our wonderful fresh watercress and another 9 unique botanicals.

Celebrate watercress this Sunday in Alresford, find out more.