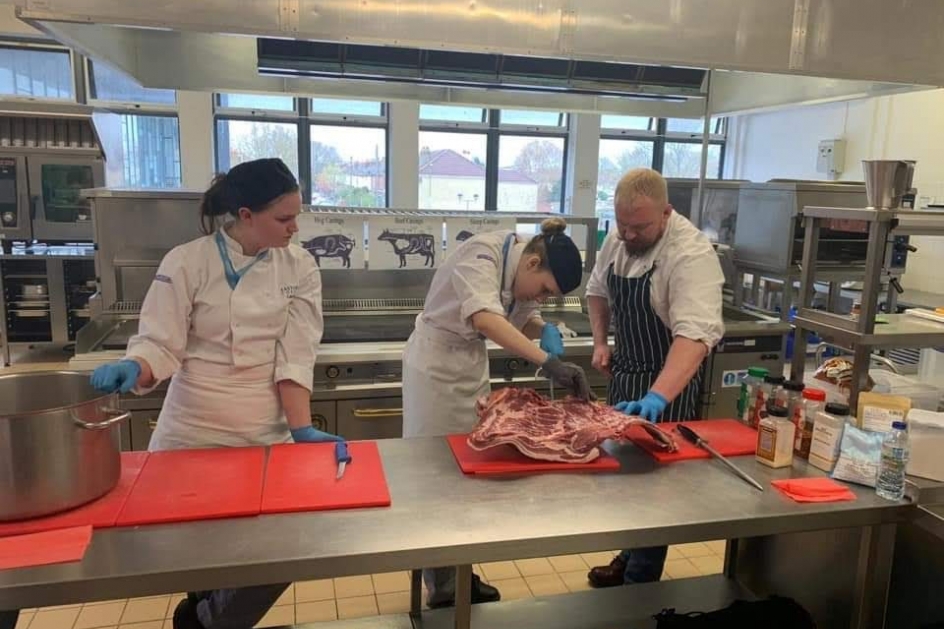 Barry Walker, founder of the Hampshire Salami Company, based at Wolverton Park near Basingstoke, launched CURED – The British School of Charcuterie – just three months ago. As part of the ‘soft launch’ CURED worked with a group of catering students from Eastleigh College making salami to enter the prestigious British Charcuterie Awards, winning Silver on its first outing!

Earlier this year Barry Walker and colleague Rich Summers approached Eastleigh College offering a One Day butchery, meat curing and salami-making course to interested catering students. Gregg Cheeseman, Head Lecturer of the catering department at Eastleigh, picked four of his final year students who were hungry to learn the new skills of butchery and meat curing. Barry and Rich spent a full day with the students, teaching them how to butcher half a pig, seam out the whole muscles for curing and mince the remaining meat for salami, as well as learning about flavourings, curing salts, casings, and how to make a fermented salami.

The day culminated in the students producing salami that was fermented and matured at Eastleigh College and entered into the British Charcuterie Awards, winning Silver for the Hampshire Black Chilli Salami. This was an outstanding achievement, particularly as the judging criteria this year was more stringent than 2018. Last year 160 medals were awarded, with 39 awards going to the salami class; this year 59 medals were awarded with just 12 awards going to the salami class (one Gold, seven Silver and four Bronze).

Barry Walker enthused: “The students at Eastleigh College should be immensely proud. The four students from Eastleigh College were amazing. They were very keen as well as being very professional in their whole approach, and were comfortable with all the skills they were taught. I would have employed any of them. They were a joy to work with.”

CURED will open its doors in this autumn running a range of courses including: Butchery for Meat Curing; ‘Pig in a Day’; Four-Day Technical Meat Curing for Butchers and Chefs; Whole Muscle Curing; Game for the Table; and Smoking & Barbecuing, including cooking on an ‘open fire’ Argentinian style.