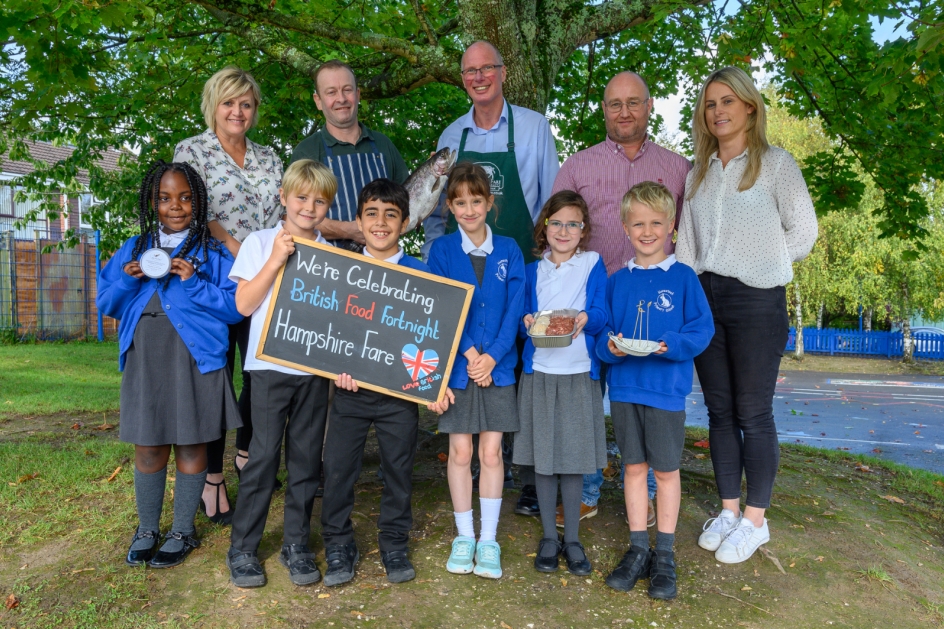 Hampshire Fare went back to school on Tuesday, 1st October – holding a Producers’ Day at Harestock Primary School in Winchester as part of its ongoing programme to work with local schools. The intention is to encourage pupils to understand how their food is produced so they are able to make informed decisions about the food they eat.

The event involved a rotating programme that included: Owton Butchers, Butler Country Estates, producers of smoked trout pâté and Laverstoke Park’s Paul Mountfield, who brought in the Farm’s buffalo mozzarella for children to taste. Altogether a series of lively, informative and interactive sessions were delivered to pupils from Years 2, 3 and 4 that involved senses of touch, taste and smell.

Children weighed ingredients to mix together trout pâté with Richard Butler, Jody Scheckter introduced pupils to his farm and herd of buffalo via video, and children were also shown how to make their own chicken nuggets and burgers by Andy Milner of Owton Butchers, as well as being advised on the importance of reading food labels to understand provenance.

Year Leader Mrs Nicki Butler commented on the activities: “"It was a fabulous opportunity for the children to get hands on with their food and find out about where it comes from. It was also a perfect link to our English and Design Technology work all about crumbles, using local and seasonal produce.  Many children were excited to go home and make their own chicken nuggets."

Tracy Nash, Commercial Manager, Hampshire Fare added: “I think it is incredibly important to help children connect with their environment and understand the variety of local food being produced in the area. I was delighted to hear one pupil announce, ‘I’m not going to eat any other cheese except Laverstoke Park’s Buffalo Mozzarella from now on!’

“I think the children will take away a great deal from the day. They were all very engaged and interested about the food – even though there was initially much amusing face-pulling about touching a raw fish!”

“This is the fifth year that Hampshire Fare has taken British Food Fortnight into a local school. The aim is to leave each school with the contacts and knowledge to hold similar events in the future therefore leaving a British Food Fortnight legacy. We really enjoy coming into schools like Harestock Primary and seeing our producers planting seeds in children’s minds and giving them an insight into how local food is made and what is available in Hampshire.”