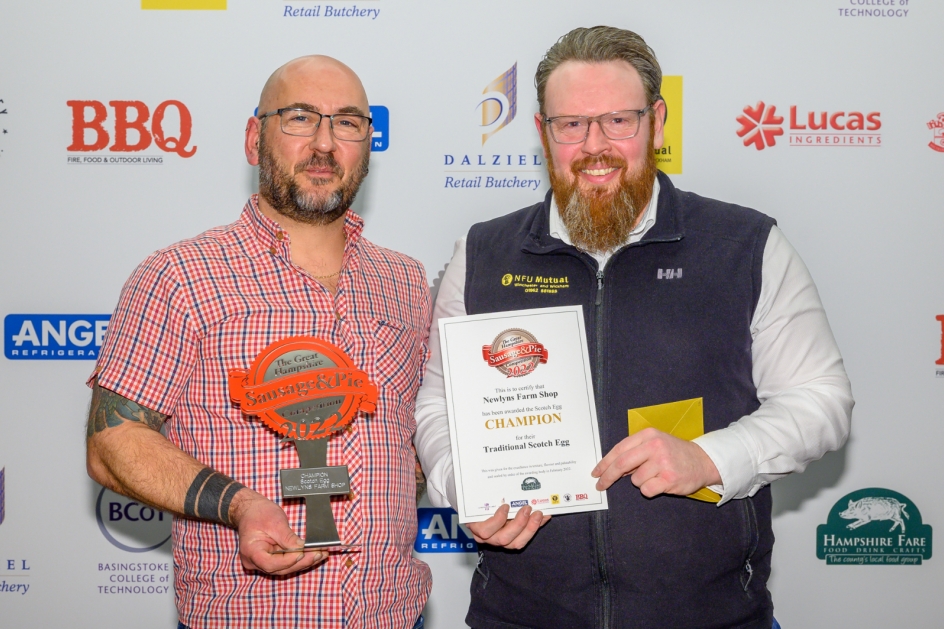 Congratulations to Jason Moore, Head Butcher, Newlyns Farm Shop (pictured above at The Great Hampshire Sausage & Pie Awards), who has received the highest butchery honour at the Institute of Meat's (IoM) London Awards event. Jason is one of fewer than 60 butchers throughout the UK to be awarded Institute of Meat accredited Master Butcher status at the Institute's annual prize-giving event, held at Butchers Hall, London.

The event, organised by the IoM and The Worshipful Company of Butchers, has been running for almost 30 years. Celebrating individual achievement in the meat and poultry industry, this year's event also served as a means of thanking outstanding members of an industry that has worked tirelessly throughout the pandemic to serve local communities and the wider British public.

Jason Moore, who has been working as a butcher for 30 years, was presented with the award by HRH The Princess Royal, Past Master of The Worshipful Company and Fellow of the IoM. Presiding over the event was Keith Fisher (F.Inst.M), Chief Executive of the IoM and himself a fourth generation Master Butcher. Commenting on the achievement, Keith Fisher said: "Being granted Institute of Meat accredited Master Butcher status is one of the highest accolades a butcher can achieve. In almost three decades of the prize-giving we have accepted fewer than 60 applications for the Master Butcher award. The process of assessing an application is rigorous and in fact we only consider applications from the most experienced and skilful butchers."

Asked what achieving the title of Master Butcher meant to him, Jason said that he was proud of this amazing achievement, reaching the ultimate pinnacle in his butchery career. He also joked that his teachers would not believe he is one of the few people in the world with this accolade.