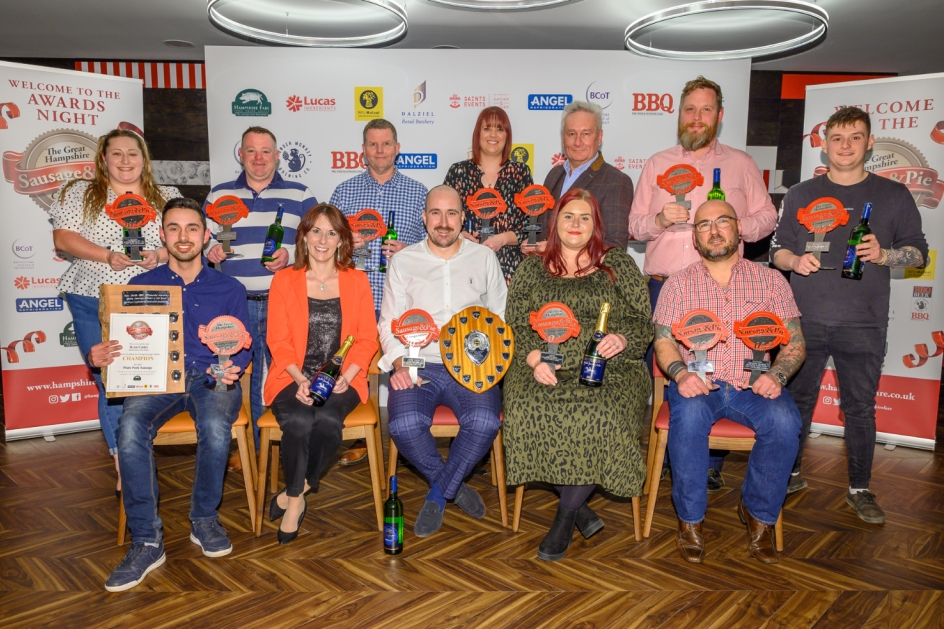 Local butchers and producers gathered on Wednesday, 9th March, for a sausage supper and the much-anticipated results of the Great Hampshire Sausage And Pie Competition 2022, announced by Louisa Hannan of BBC Radio Solent.

Organised by Hampshire Fare, this nationally esteemed competition returned, after a year’s break, with new categories and a new venue for the Awards ceremony: St Mary’s Stadium, Southampton. Despite a year’s absence, entries to the Competition were higher than ever: 243 entries from butchers and pie-makers from across the region, including the first ever entries from the Isle of Wight.

Tracy Nash, Commercial Manager, Hampshire Fare, commented: “We have had a fantastic number of entries from so many businesses, including many who hadn’t entered before. They’ve all received high praise from our expert judges. This, and our wonderful sponsors who are so enthusiastic about supporting this competition, shows what a highly regarded Competition this is! I would like to thank them all. I’d also like to thank Hurstbourne Forge in Andover who made our bespoke trophies, Danebury Vineyards for providing our champions with bottles of wine, and New Forest Spring Water for keeping us refreshed during the evening.

“This year’s Competition saw the introduction of new categories, including Scotch Egg, Sausage Roll, and Alternative Sausage. They were all very popular; in fact, it was a winner of one of the new categories that was named Supreme Champion! This business was also a new entrant to the Competition: Buckingham’s Artisan Butchery in West Meon.”

Buckingham’s Artisan Butchery was named Supreme Champion after winning the Alternative Sausage category for a Chicken, Lemon and Tarragon Sausage. Damon and Sadie Buckingham were genuinely surprised to win Supreme Champion, having only moved to Hampshire to open a butchery in West Meon in March 2020, just as the first lockdown was put in place and just after the last Great Hampshire Sausage & Pie Competition.

Damon explained: “We only moved to Hampshire two years ago. We didn’t know a lot about the area, but we knew about the Competition before moving to the area, and we knew how seriously the Competition was taken. We thought we would enter and see how it goes. I am blown away to have won Supreme Champion the first time we’ve entered and with a non-pork product! We always produce a chicken sausage as there are so many people who don’t want a pork sausage. We experiment and play with flavours, and created the Chicken, Lemon and Tarragon sausage only about two months ago."

Judge Denis Elliott who judged the Chicken, Lemon and Tarragon Sausage, commented: “I can’t fault it. That’s 100 out of 100 marks. It is a super product. Chicken doesn’t lend itself to a sausage, yet this is beautiful – the tarragon doesn’t overpower it, just balances it beautifully, with the lemon cutting through.”

Tracy Nash added: “Not only to be named as a category Champion the first time they’ve entered, but to win Supreme Champion is such an inspiring success story!”

Stephen Sheaf of Briddlesford Lodge Farm said: “It was incredible news. As it was the first time we entered, we couldn't have expected any more really! We sell the Luxury Veal and Wild Mushroom Pie in the shop alongside a Vealand Vegetable Pie. They are probably the most popular pies we do because all the veal is from the farm here... that is what everyone loves, that is it all local produce."

Jason Moore of Newlyns Farm Shop said: “This success is testament to the team. It is a good Scotch Egg and we sell a lot of them, but winning the Scotch Egg category was still quite a surprise! The whole team will be very happy.”

Tracy Nash finished: “We are very proud of this nationally respected Competition, particularly as we have been told by our local butchers and pie-makers that they value this Competition because it provides such a brilliant way of showcasing the quality produce available at local butchers, delis, farm shops and village stores across the region, encouraging people to ‘shop local’. It is not just about our Champions, as amazing as they are, our expert judges tell us that our producers are outstanding - so look out for all our Gold, Silver and Bronze winners!"

Results of all Gold, Silver and Bronze award-winners are available HERE for you to download and keep.

Hampshire Fare thanks the sponsors for their support; without them this highly regarded Competition would not be able to run. The sponsors include: Angel Refrigeration, BCoT, BBQ Magazine, Dalziel Retail Butchery, Lucas Ingredients, NFU Mutual Winchester and Wickham, Powder Monkey Brewing Company, and Southampton Football Club (Saints Events).