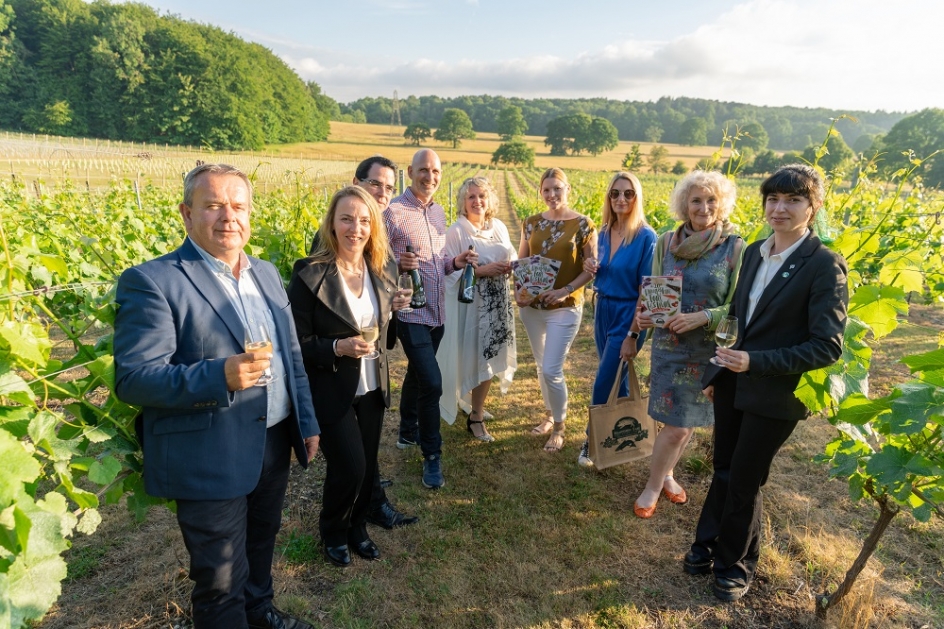 The 20th Hampshire Food Festival was launched on Thursday, 23rd June, at a special event hosted by Quob Park Estate, a vineyard estate and wine cellar club near Wickham.

Tracy Nash, Commercial Manager, Hampshire Fare, welomed guests to the launch event. Tracy Nash said: “Thank you all for coming to share our excitement at the return of the Hampshire Food Festival this summer. It was to be the Festival’s 20th anniversary in 2020, but we all know what happened! I would also like to thank Quob Park Estate, which only opened to the public earlier this year, and has provided a stunning setting for our anniversary launch.

“This year’s Hampshire Food Festival has been turned round in just four weeks – and that is entirely due to our producers and supporters: each and every one here this evening helped make the 20th Hampshire Food Festival happen! To give you a flavour of this year’s event, the Hampshire Food Festival programme features more than 70 food and drink events across the county, running from the 1st-31st July. These include behind the scenes tours of breweries, farms and vineyards, 'distil your own gin' experiences, BBQ masterclasses, sourdough workshops, one-to-one cookery classes with Chef Lenny Carr-Roberts, a regular on Saturday Morning with James Martin, and Westlands Farm Shop’s first Food Fare.”

Mike Wright, Chairman, Hampshire Fare, thanked Hampshire County Council for its foresight in establishing Hampshire Fare, the county food group behind Hampshire Food Festival, over 30 years ago, and he invited Cllr Rob Humby, Leader of Hampshire Country Council, to speak. Cllr Humby explained that his family had been in Hampshire for 450 years and had been in farming for many years, so he understood and appreciated the value of local producers to the county's character and economy. Cllr Humby added: "I am totally passionate about Hampshire! We live in an amazing county and I truly believe we produce some of the best food and drink in the country!”

The launch event was attended by more than 100 guests, along with over 30 local producers, showcasing the variety and quality of local food and drink. Guests enjoyed Quob Park Estate sparkling wine and delicious canapes to the accompaniment of acoustic duo The Henrys while watching the sun setting across the valley. The event featured a BBQ demonstration kitchen fronted by top BBQ chefs which was run by SoCal BBQ Kitchen, one of the county’s leading suppliers of BBQ equipment and headline sponsor for this year’s Hampshire Food Festival Programme. Guests were also treated to goody bags with treats from Calbourne Classics, Hill Farm Juice, Homemade Brownie Company, New Forest Shortbread and The Artful Baker, plus a month’s membership of Quob Park Great Cellar Club.

At the close of the event, Rob Terry, Founder and Chairman, Quob Park Estate, commented: ‘It was fantastic to be part of the Hampshire Food Festival launch event. This experience exceeded our expectations, and it has been a pleasure to meet so many other like-minded Hampshire producers.’