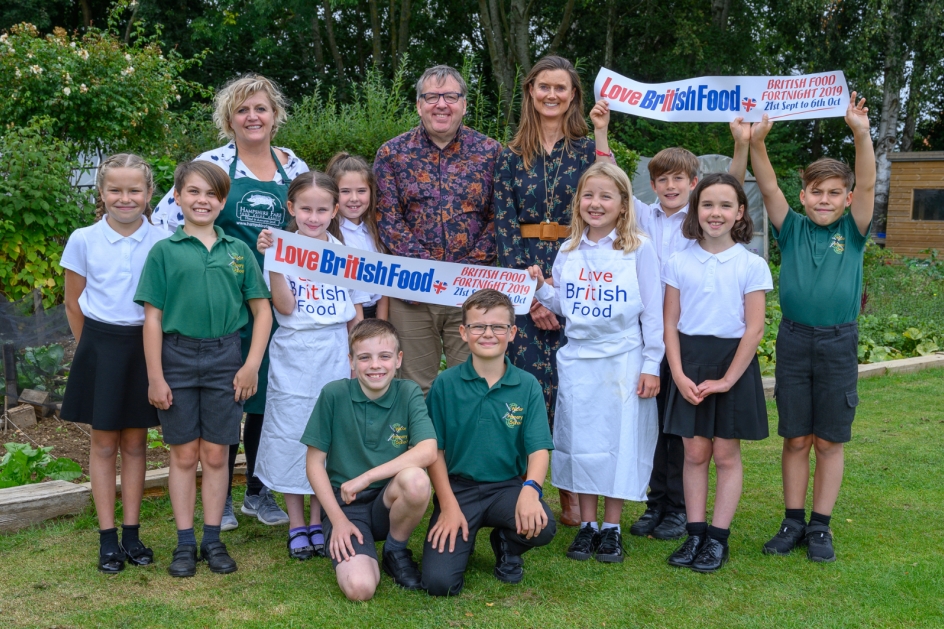 Hampshire Fare flew the flag for the county by launching this year’s British Food Fortnight (21st September-6th October): the biggest annual, national celebration of British food and drink. Hampshire Fare was given the opportunity to launch this important nationwide initiative after the county food group won last year’s British Food Fortnight competition for its work in local primary schools.

Tracy Nash, Commercial Manager says: “It is a massive feather in Hampshire’s cap; Hampshire Fare is not only flying the flag for great British produce, we’re also ‘flying the pig’ for Hampshire! As part of the launch we had a guest of honour, a Hampshire Hog, symbolic of the county, complete with super-pig cape, which has been created for us by The Lantern Community in Ringwood.

“For the launch we returned to Wicor Primary School in Portchester. This is the school where our involvement in British Food Fortnight started back in 2015. Since then we have introduced growers and producers to a different school each year, to encourage children to take an interest in where their food comes from. In this way we have created a legacy, as the schools we have worked with continue to hold food activities during British Food Fortnight.”

The launch event at Wicor Primary School, where horticulture is an integral part of the environmental curriculum, involved a harvest lunch of local produce, served by Year 5 pupils, for a guest list that included chefs, producers and influential people within the local food industry. Plastic was banned, replaced by glasses and bamboo cutlery and plates.

Alexia Robinson, says: “The launch will live long in my memory; the most magical, wonderful, spectacularly special occasion. I am so pleased that I have been to Hampshire to see Hampshire Fare’s work in action. I now have a true sense of it all; the work with producers, with HC3S and with individual schools. Hampshire Fare’s hard work is remarkable.

“Wicor School is a gem doing more than any school I think I have ever seen to create the perfect learning environment for children. The Headteacher, Mark Wildman, is inspirational.  I wish there could be an event at the school that every Headteacher in the South of England could attend so that they can see what is possible. If ever there was a group of people who sum up what I am trying to achieve with Love British Food, this is it.”

Mark Wildman, Headteacher, Wicor Primary School, adds: “Our school grounds have grown organically, pun intended, with an orchard, allotment, hen coop, hives and polytunnels. [At Wicor School] we are passionate about nature and want our children to be grounded so that they can make informed decisions and understand that food choices have consequences.”

Tracy Nash concluded: “Thank you to Wicor Primary School for welcoming us back. We are very proud of the good quality produce available in Hampshire and across the country, and British Food Fortnight is a great opportunity to get that message out there to the public generally and into our local schools, to enthuse the next generation about food and their local environment.”